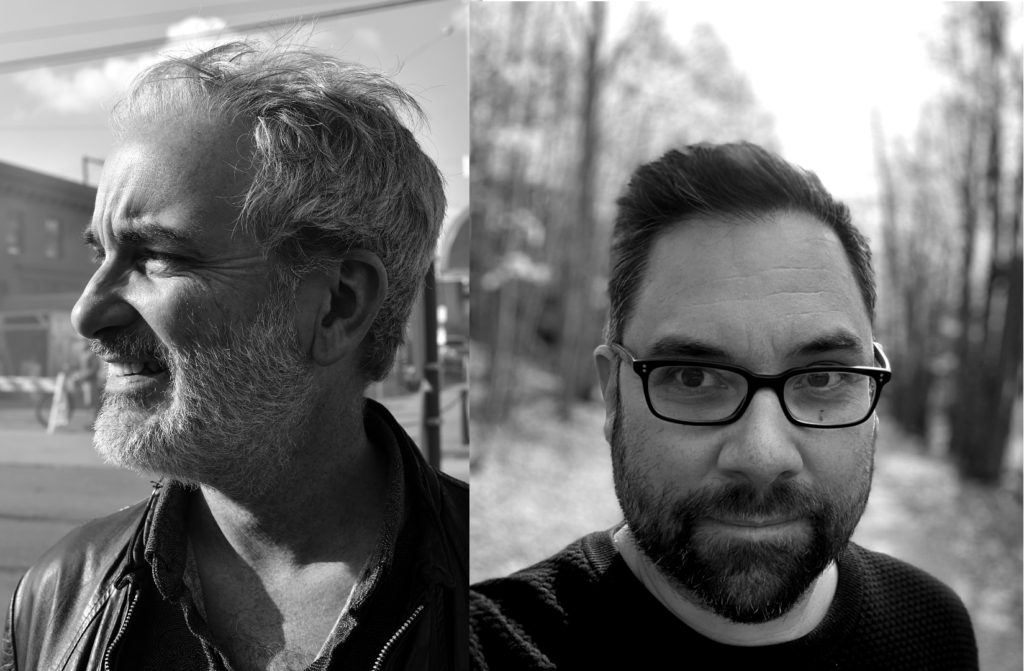 The following is an excerpt from an interview that Dylan Robinson gave for a SFU graduate course taught by SpokenWeb team member Clint Burnham. The full transcript will appear in the forthcoming publication Resistant Practices in Communities of Sound, a collection of critical work and interviews edited by Deanna Fong and Cole Mash. Dr. Robinson will also give a plenary lecture for the upcoming Listening, Sound, Agency Symposium taking place from May 18-23, 2021. View the program with an abstract of Robinson’s talk here.

[Clint Burnham] Dylan, in your book, Hungry Listening: Resonant Theory for Indigenous Sound Studies, you mention the words of thanksgiving that Mohawk elders give on Haudenosaunee and Anishinaabe territories where Queen’s University is situated, and I want to give some more here. First to you, for making time for our conversation when we’re all under tremendous pressure from our employers, our universities, and our families, as we deal with this extraordinary pandemic, and I also want to thank you for your generosity for passing on to the students so much from Hungry Listening. So, thank you on both counts, and thank you for writing this book; it’s so rich, it gets me thinking, just to get my theory out of the way, of Adorno’s essay on the regression of listening and psychoanalytic notions of the voice as object and the power valences of listening to soundscapes in our everyday life. And I do like how you kick R. Murray Schafer to the curb at the start of your book. He’s so venerated at SFU, as you know.

[Dylan Robinson] Yes, it’s true. Though I should also say that for all the necessary critique of the settler colonial orientation of soundscape studies and compositional practice Schafer worked in, so much of my own formation as an artist, writer, and former student at SFU emerges out of a relationship with Schafer’s work in inter-arts and soundscape traditions as well.

[CB] Right, of course, right. It is worth remarking how you build into your book these “Event Scores,” and in the first one, “xwélalà:m, Raven Chacon’s Report,” you write,

hear the word sound scape
built upon the word landscape–

But also, and I think, the other day, when I was reading your book, and I sent some quick message to you about me listening, and it was early in the morning and the birds were chirping outside, and I sent that to you. And then later, I read where you talk about different listening to the landscape: if you’re hunting, compared to some leisurely activity of hearing birds in my little neighbourhood. So, there’s so many weavings back and forth, but also in terms of what your book does with regard to the graduate course I am teaching and questions of reconciliation, the demand that settlers listen to the stories of survivors, the power structures, whereby judges, priests, or psychoanalysts listen, all that is thrown into new relief by your ideas of shxwelitmelh xwélalà:m. [Clint mispronounces]

[DR] I’ll have your whole class saying it by the end.

[CB] Yeah. Hungry Listening calls for disciplinary redress and resurgent perception, analysis of structural refusal, and always a nuance of terminology, enriched not only by how you engage with such amazing and interesting examples as Peter Morin’s and Tanya Lukin Linklater’s performances and Jordan Wilson’s territorial practice, but also your attention to critical, institutional, and auditory paradigms, make this such an important book. But maybe, to start, we can look at some of those questions that my students sent. And one of the first questions was saying:

I’d be interested to hear what Dylan has to say about the relationship between the performance of Indigenous music, such as a traditional welcome song, at institutional events, such as a university orientation or commencement, and the practice of performing land acknowledgements at these events, in relation to his idea of spatial intersubjectivity.

[DR] Yeah, sure. It’s an interesting question and there are a few different directions my answer would take depending on what is meant by a “welcome song.” The kind of work such a song would do in this example is contingent on the specific song sung, and the specific context it is presented in. It would mean something very different depending on who sings it, too, and where they are from. So, I’m not sure if there is a specific example that the student is thinking of, but it’s a really important question for a number of reasons.

Firstly, the work that’s often being done within welcome, institutional welcome, by universities, is of the kind – if it’s done by an Indigenous person – that reminds settlers and other non-Indigenous folks the basic fact of whose land they are gathered upon. The primary addressees are settlers, non-Indigenous folks and “the university” in this context. The song, in a sense, like other welcome protocol, is a question: how will you proceed in the work you are doing today in relation with—and with accountability to—those who sing? But I wonder to what extent it is heard that way. Someone might say, you know, they’re giving a welcome song, that’s nice, they’re being generous and extending welcome feelings. I do think such “welcomes” are mis-heard as a welcoming atmosphere, rather than the “Hey, you there!” of other kinds of address. So I wonder how the term “welcome song” already sets up the conditions for (mis-)interpellation.

But I think what is important in the question is also the way in which the student is referring to spatial subjectivity because in other instances those songs that Indigenous folks offer are not given for physical human presences—the audience and the attendants; they are given for our ancestors or for the land, or for space itself. I talk elsewhere about this in terms of Indigenous languages offered at the beginning of events. I often speak in Halq’eméylem and begin a gathering or begin locating who I am with Halq’eméylem, which is the language that Stó:lō people use and how we give welcome at home when we’re in our communities, not because it’s important from a perspective of linguistic sovereignty or asserting the fact of its vibrancy, both of which are important. Instead, I use it because I understand that action of speaking in Halq’eméylem as addressing my ancestors who are with me in whatever space that I’m gathering in. And so it’s important to think about the intersubjectivity of song—the relation between song and space—because this song’s address might be oriented toward the lands, the waters, and other non-human presences of that space. And we don’t need to draw a line here between intersubjective relationships with so-called natural spaces, perhaps the song addresses the walls, the floor, the ceiling, the lights—does it ask for an accountability there, too? And there’s a potential here, too. I’m really excited by the possibilities for thinking about how we as Indigenous people might create new songs that address non-human relationships or songs that address built environments, both the colonial and not, as doing a kind of work that is more than simply producing a song.

[CB] Thank you, and I was thinking of two things. In your book you talk about Musqueam/xʷməθkʷəy̓əm anthropologist Jordan Wilson and the work that he did for the c̓əsnaʔəm the city before the city projects—at the Musqueam reserve, at the Museum of Vancouver, but also at the UBC Museum of Anthropology, which is also on Musqueam land, of course—about the elders listening to each other and not just playing that game of waiting to get their thing in— not just what I have to say, but hearing what you’re saying. (Wilson: “When one person was speaking, the rest of the group listened respectfully – as opposed to waiting for their turn to talk.” HL 70) But the welcoming that, if I can put it this way, is weaponized by the university institutionally. I don’t want to underestimate the agency of the group or the person doing the welcoming and what’s going on in terms of intentionality and their subjectivity and what they’re doing with their language in singing those words. You were talking about this in terms of speaking to the ancestors: the language as a living thing, all the histories of the recuperation of language. These conditions exceed any institutional intentionality to use welcoming and other land acknowledgements as a “get out of jail free card” for the university. Or when individual academics do those things in a good or shoddy way—those effects, however, cannot be predetermined. The Métis lawyer Patricia Barkaskas, academic director of UBC’s Indigenous Community Legal Clinic came to our class as well. We were talking about things like the federal government’s apology, and that even under the most instrumental forms we don’t know where that’s going to land, how that’s going to be received by Indigenous people. I don’t want to be too fancy or too dystopian about these possibilities, and also, I want to remember Marianne Nicolson, the Musgamakw Dzawada’enuxw artist, who talks about welcomes in the Kwak’wala language, and the welcomes were not saying, “You can stay here and extract our land.”

Note from CB: Dylan Robinson was scheduled to visit a graduate course I was teaching in Spring 2020 at Simon Fraser University. When this was interrupted by the Covd-19 pandemic, we conducted an interview on Zoom, including questions I had solicited from the students in the course. Thank you to Dylan for his time – including the time, months later, to edit the interview. And thank you to the students in the class – Michelle Allin, Jacob Goldbeck, Rawia Inaim, Matea Kulic, Amila Li, Saba Pakdel, and Kevin Spenst. Thanks as well to Rawia for the transcription and to Deanna Fong and Cole Mash for their interest in this interview for the book.

Dylan Robinson is a xwélmexw (Stó:lō/Skwah) artist and writer. He is also an Associate Professor at Queen’s University, where he holds the Canada Research Chair in Indigenous Arts. He is the author of Hungry Listening (Minnesota, 2020) on Indigenous and settler colonial forms of listening. His current research focuses on the material and sonic life of Indigenous ancestors held by museums, and reparative artistic practices that address these ancestors’ incarcerations in museums. Other publications include the co-edited collection Music and Modernity Among First Peoples of North America (Wesleyan, 2019) which received both the AMS’s Ruth Solie Award for best collection and the Society for Ethnomusicology’s Ellen Koskoff Prize for edited collections.

Clint Burnham was born in Comox, British Columbia, which is on the traditional territory of the K’ómoks (Sathloot) First Nation, centred historically on kwaniwsam. He lives and teaches on the traditional ancestral territories of the Coast Salish peoples, including traditional territories of the Squamish (Sḵwx̱wú7mesh Úxwumixw), Tsleil-Waututh (səl̓ilw̓ətaʔɬ), Musqueam (xʷməθkʷəy̓əm), and Kwikwetlem (kʷikʷəƛ̓əm) Nations. Clint is Professor and Chair of the Graduate Program, Department of English, Simon Fraser University and works on psychoanalysis, Marxist theory, Indigenous literature, and digital culture. His most recent book is Does the Internet have an Unconscious? Slavoj Žižek and Digital Culture, (Bloomsbury, 2018), and he is co-editing, with Paul Kingsbury, Lacan and the Environment forthcoming in 2021 from Palgrave. (Photo by Chris Brayshaw)