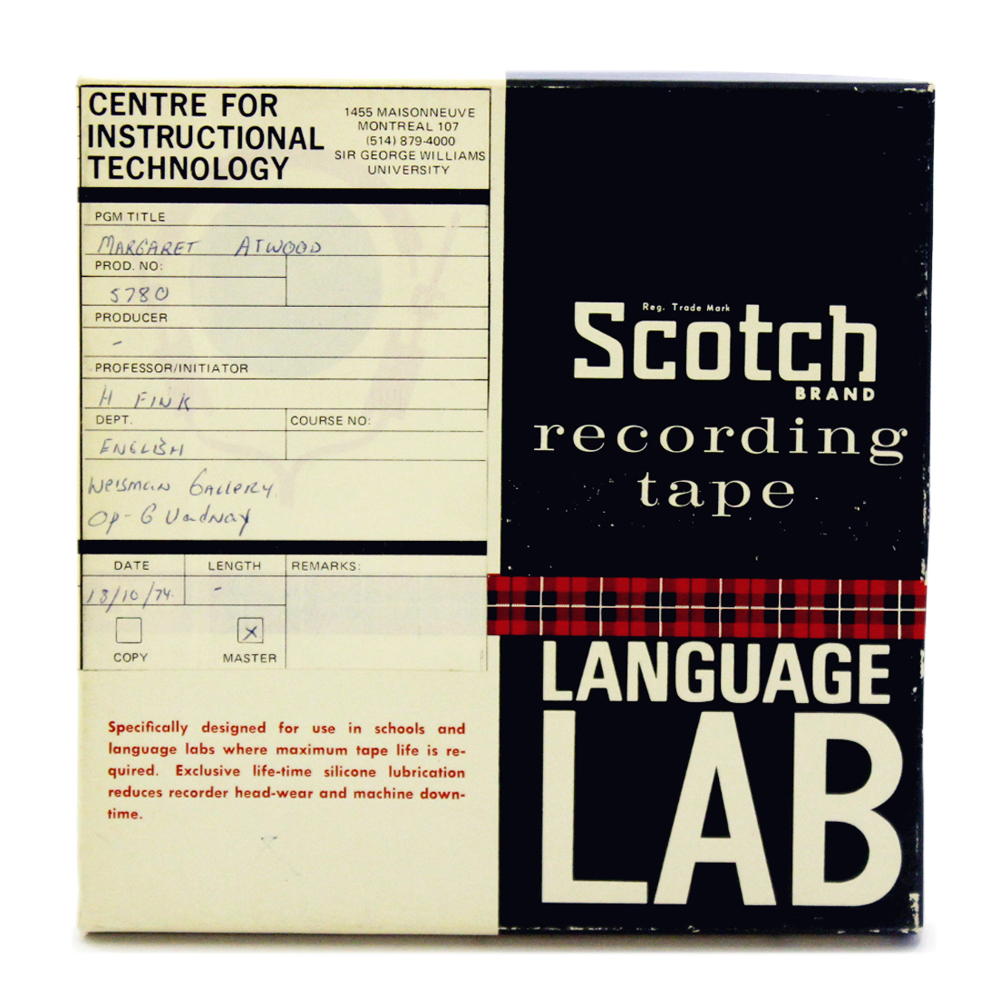 The audio clip for this Audio of the Week is introduced by SpokenWeb RA Emma Telaro. Read about what caught Emma’s attention while she listened to a recording of a reading by Margaret Atwood that took place in a hot and crowded art gallery at Sir George Williams in Montreal on October 18, 1974.

I am intensely aware of how hot it’s been this Summer, here, in Montreal. Really, how could anyone ignore the plain fact of heat? Of warmth? It’s just been too hot, and too hard to do anything but give in to indolence, perhaps somewhat guiltily.

Summer has been too much. I’ve held my breath, heatwave after heatwave, in anticipation of a break. But it’s precisely this— this too much—that I have also relished. Heat characterizes my most fond memories. And, what is most alarming and intolerable about heat is precisely what I find most decadent: the indulgence of bones melting, skin damp and warm. Heatwaves are seductive and, in the worst of summer, sublime (feverish, terrifying and, who could forget the looming threat of pandemic, a knife over our heads?). I think heat and I think of Charles Traub’s photos of Via Dolce, the sweat of Rio in The Invisible Life of Eurydice Gusmão, and the color orange. I hear, too, the sound of humidity like an incessant buzzing.

In the Winter of 2020, in the context of Prof. Jason Camlot’s Literature and Sound Studies Seminar, I first listened to Margaret Atwood read “Late August.” The poem occurs in the recording of her 1974 reading at Sir George Williams University (now Concordia), a reading that was an unusual, frantic event caught in the affair of an October heatwave and an overflowing gallery room. Atwood reads from her book You Are Happy (a collection of poems, she assures the crowd, that is not as straightforward as it seems), though she frequently interrupts her performance, ultimately cutting it short to accommodate the unlikely heat. The sounds of heat—the introducers, Atwood and the crowd all audibly restless—came at a moment when, like most, I was starved for the comfort of a warmer season. So I wondered, what in sound enabled such visceral heat? What does heat sound like? I listened obsessively to the sonification of heat in the recording and turned this listening into an audio-essay, which became part of the collaborative episode that concluded the first season of The Spokenweb Podcast. In the episode, I play “Late August” and reflect on what it means to hear the poem when considering heat; or, rather, what it feels like to focus the affective and aesthetic experience of heat—to think heat in terms of sound, poetics, and the extra-poetic.

In the recording, various sounds signifying heat converge, and culminate emphatically with “Late August.” To listen to Atwood, to the crowd, and to the room—to hear the heat of “Late August” so tangible—could only happen on that night, in that particular heated setting. Her voice, dreamy, reflects the ambiance of performance, the heat of the event itself, and of the poem’s heated texture. Something of “Late August” speaks to a liminality that feels, also, final—perhaps in the suggestion of lateness—of a cusp, or boundary wanting to spill. Atwood reads at this limit, in a slow drawl but urgent too. She reads of an August threatening to burst like the plums, “lush” and “distended” like the overflow of the room. The poem is in the plums, decadent, ripe—like heat itself. Dark but bright as the “cold pond, bladed”; tension builds, everything might break— “Need Need” echoes “Ripe Ripe”—and the poem ends abruptly not with a bang but with a languor that seeps: “The air is still / warm, flesh moves over / flesh,  there is no / hurry.”

As we bask in late August, I mourn the end of summer despite how insufferable it has felt. Late August like the Sunday of summer—like the still breeze in the dead of evening—balmy and warm. The plums taste sweetly, there is no hurry.

Emma Telaro is an MA student in English at Concordia University, and a research assistant for SpokenWeb. She came to sound through the Beats and is now largely interested in the disruptive potential of sound and of silence in the literary. At the moment, her research centres on aesthetics of silence in hybrid forms of writing, and in relation to theories of poetics, language and translation (think Carson, Lispector and, yes, Kerouac). She is an assistant editor for SPOKENWEBLOG.