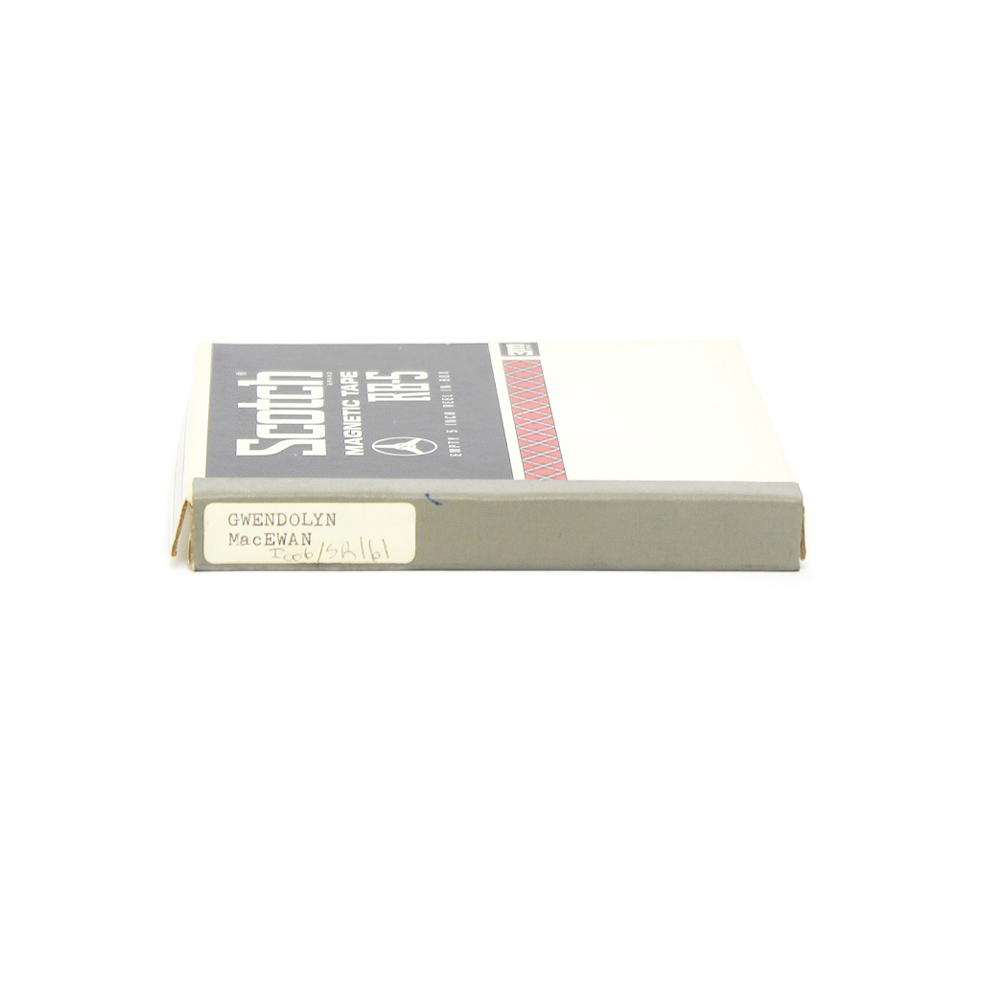 In this Audio of the Week, you are listening to the voice of poet Gwendolyn MacEwen reading in Montreal on November 18, 1966. The reading took place at Sir George Williams University (now Concordia) and it was a joint reading with Phyllis Webb. After an introduction by Roy Kiyooka (an excerpt of which is the first Audio of the Week) Webb reads, followed by MacEwen. Webb jokes that she has “the Toronto plague” (having travelled from Toronto for the reading) and MacEwen too starts her reading by wondering if her voice might “go out” during it and that, if that happens, they can put on the album that they have just recorded for CBC. Thankfully, her voice does not go out, or, as she says, “the voice is intact.” That phrase is the title of an episode about MacEwen on The SpokenWeb Podcast: “The Voice is Intact: Finding Gwendolyn MacEwen in the Archive.” Early on in this episode, producer Hannah McGregor and guest Jen Sookfong Lee listen together to MacEwen reading the poem “The Zoo” from this 1966 recording. As we listen to them listening on the podcast, we hear a gasp and even an exclamation: “Melodious!” What was it in her voice that they were responding to? To try to answer this question through your own experience of listening, this Audio of the Week selects another poem of MacEwen’s in this same 1966 recording: “I Should Have Predicted,” published in The Shadow Maker (1969).

“I Should Have Predicted” caught my attention for many reasons: the articulation of the poem fluctuates in its pacing and volume (“rising and falling” like the poem describes) making it a dynamic poem to listen to for its sonic motion; I have danced to this poem and, yes, that dancing was a close listening; and the enigmatic words of MacEwen’s that frame the poem. She states that the poem first appeared in “a Mexican magazine in Spanish,” but so far I have not been able to find this publication though the search continues. After reading it, she says a few words about how the death of “this city” has been interpreted, which I will leave for you to discover by listening to the poem in the context of the entire reading. Finally, I have kept the sound of her cough at the end as a reminder of the precariousness of her voice that night – and an audible reminder of the body, here, in this archival recording.

Resources
Listen to the entire recording of Gwendolyn MacEwen reading in 1966 here.

Listen to “Ep.7: The Voice is Intact: Finding Gwendolyn MacEwen in the Archive” and more episodes from The SpokenWeb Podcast.

Katherine McLeod researches and teaches Canadian literature through sound, performance, and archives. She co-edited with Jason Camlot CanLit Across Media: Unarchiving the Literary Event (MQUP, 2019), and her recent publications include chapters in the books Moving Archives (WLUP, 2020) and CanLit Across Media: Unarchiving the Literary Event (MQUP, 2019). Currently, she is an Affiliate Assistant Professor in the Department of English at Concordia University, where she is writing a book about women poets on CBC Radio, curating the Audio of the Week Series on SPOKENWEBLOG and producing digital content for the Audio of the Month as part of The SpokenWeb Podcast feed.

Follow @kathmcleod and check out the site she curates for Montreal readings at WherePoetsRead.ca and @poetsread.

McLeod, Katherine, “Gwendolyn MacEwen reading “I Should Have Predicted”,” SPOKENWEBLOG, 15 May, 2020, https://spokenweb.ca/gwendolyn-macewen-reading-i-should-have-predicted/.