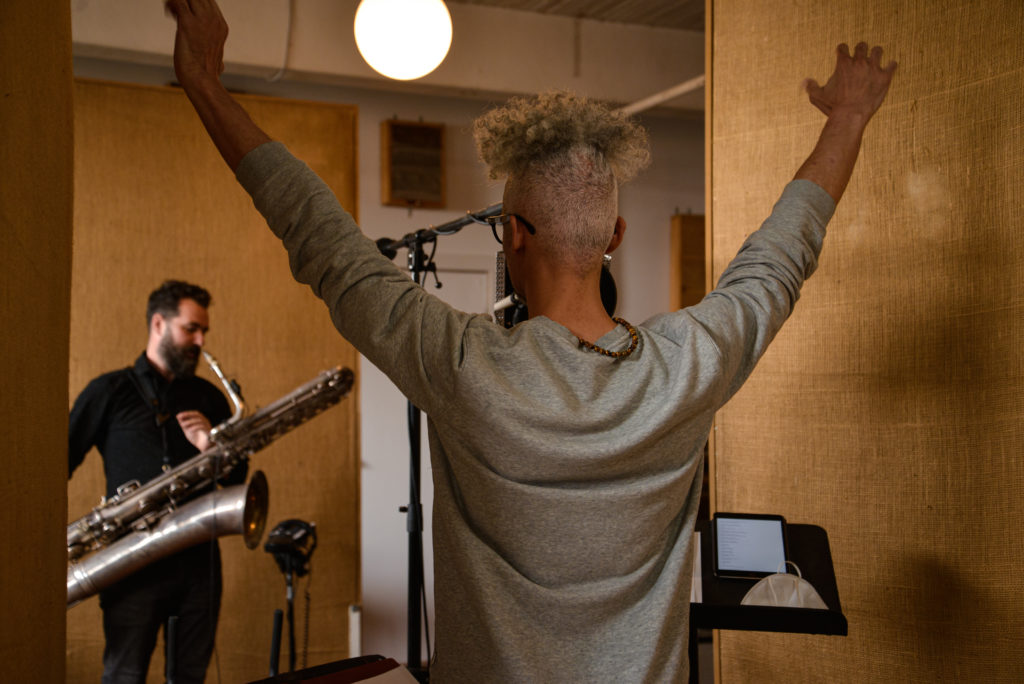 Specially commissioned for the Listening, Sound, Agency Symposium, Griffin-award-winning poet Kaie Kellough, designer and artistic director of LOKI studios Kevin Yuen Kit Lo, and Constellation recording artist and saxophonist Jason Sharp, collaborate on an interdisciplinary work. Long-awaited, Small Stones will premiere tonight, 22 May 2021, 5pm ET, and may be watched in the embedded video below. To enhance and support the listening and watching experience, Kaie has generously shared some reflections on the process of creating this work with his collaborators and the meandering iterations of the poem through page, dialogue, and performance. After reading about and being immersed in Small Stones, please rejoin the Zoom link received as registration for this event for a Q&A with the artists. Enjoy this poem!

These notes are dedicated to Jason Camlot, Klara du Plessis, and SpokenWeb with gratitude for their generosity, their support, and their encouragement of this project,

to my collaborators Kevin Yuen Kit Lo and Jason Sharp for sharing in the adventure.

i. Other People’s Mouths

Standing in front of two microphones in studio, headphones on, waiting for a cue to start recording, I reminded myself: “the poem is the inflection, it’s the torsion in the delivery, it’s the attitude.” That statement strikes me as only being partly true, but valuable in the context of performance. It surprises me because it reveals how dramatically my thinking about the poem has shifted since I started writing. Devoted to print as I am, I no longer consider publication to be the poem’s final or most desired destination. Publication is one way to launch a poem into the world, but once the poem is launched, I would rather see it soar and be transformed by its encounters than see it arrive in a final form.

Having spent years in oral poetry circles, I’ve known many superb poets who show little interest in publishing in journals or in book format. I’ve known poets who eschew committing their work to paper, and who instead cultivate a purely oral practice, who do not think of the poem as needing to have a relationship to text in order to be a poem. Their approach supports the observation made by Amiri Baraka, that: “poetry is not a form but rather a result.” Internalizing this distinction and being able to act on it can be liberating for both the poem and the poet. It has been liberating for my practice, because it suggests that a poem can be electric, versatile, that it is imbued with agency, that it can act on the world and that, among the most important things a poem can do once it comes into existence, is to appear in other people’s eyes, ears, mouths, and thoughts.

The poem that informs the audio and visual portions of Small Stones was published in print in 2019, but different versions have been performed nationally, both online and in person. A raw and somewhat improvised version was presented as a livestream in collaboration with drummer JahSun and saxophonist Jason Sharp. The version of the poem in Small Stones is different from the print version as well, and its visual interpretation by Kevin Yuen Kit Lo draws the work in yet other directions. I note these various presentations because they reconstruct the poem each time and offer possible developments in different mediums. The poem is never fixed. It becomes a language-object that can be taken apart and rearranged. Its parts can be disassembled, disarticulated and even discarded. And yet, amid this cultivation of possibility, subject to and a product of a rough craft, the poem persists.

Several weeks before going into the studio to track Small Stones, Jason, Kevin and I were rehearsing in the Lion d’Or venue in east Montréal, as part of a 7-piece ensemble that Jason had put together. The venue had been rented so that under pre-vaccination Covid conditions we could prepare a 40-minute musical composition while observing proper social distancing. Our performance, titled FYEAR, would be recorded in audio and video formats and broadcast online by jazz festivals across Canada and in Europe. Since it was a performance, we followed a score, honed the various passages, and repeatedly played the work from beginning to end. We took breaks to discuss our progress, then reworked the passages that needed to be streamlined. We performed three complete takes for the cameras, and if I remember correctly, we settled on the final one.

The approach to creating Small Stones was different. Playing in studio involves separation. Soundproofed doors, noise-cancelling headphones, and tall wheeled baffles keep sounds (and musicians) apart. While the studio does not feel as immediate as the live stage, a mastered recording can still sound visceral. Among the many sound-shaping options available in studio, we wanted to experiment with multiple overdubs, with driving saxophones and voices through vintage amplifiers, with mixing the various amplifier sounds with the clean signals, with stereo migrations, and with using click-tracks to establish exact timing while also preserving some of the flight and risk of performance. When we exited the studio after two days of tracking and rough mixing, we joked that we hadn’t played the work through a single time, and it was uncertain whether we ever would.

Small Stones has three sections. The first establishes scope by harmonizing on open tones and layering fragmented narrative passages. It also introduces noise to build density and tension. The second imposes weight, vigor, and assertion, and the third offers a final increase in tempo that eventually returns to melody, to open tones, and ends on an unresolved note. Tension, already written several times in this brief statement, is integral to Jason’s compositional strategy. It creeps into the harmonies and informs a vocal restlessness. Another word that often accompanies tension in our discussions is development, and one concept supports and produces the other. Tension is what we seek to maintain, because it holds a listener, because it holds structure within a work and teases movement. Even when we enter sections that we enjoy playing, sections whose sound we relish, we avoid languishing. We try to include some variation in tempo, dynamics, or some nuance of inflection that moves the passage forward. What that means for us as players is that we are always present, in anticipation. We are always in the moment of charged articulation while collectively listening ahead.

In telling the story of how Small Stones came into being, I should note that the work itself tells a story. The poem on which Small Stones is based was published as “Alterity,” in the collection Magnetic Equator, in 2019. Alterity was not so much written as it was assembled. I had previously experimented with literary collage, but without success. I liked the randomization that the process produced and enjoyed how its results could unexpectedly warp meaning, but I wanted to infuse that collage with historical relevance and narrative direction. I wanted to bend the formal exercise and its aleatory results toward the personal.

Alterity begins by seaming together the opening sentences from all of the stories in The Eye of the Heart: An Anthology of Latin American Short Fiction, edited by Barbara Howes, to produce a vertiginous narrative that fails to respect linearity, that appears to fail to move ahead, and that instead spirals into itself. I was inspired by the chorus of the Max Romeo song: “one step forward, two steps backward / down inna Babylon,” which shifts in its next iteration to, “onward forward don’t step backward / step outta Babylon.”

The poem then moves forward. It samples quotes drawn from the works of Caribbean poets and fiction writers, some celebrated and others lesser known, among them Grace Nichols, Maryse Condé, Kamau Brathwaite, and many others. I handled those fragments reverently, devotionally. I filtered them through my own poetic and editorial process, fortified their structures with repetition, reshaped phrases to create a fluid dissolution of one set of images into another, and juxtaposed passages to comment on the settling and colonization of parts of the Americas.

The narrative is broken but broad. It is not just one narrative but instead it veers into many voices and many stories. The poem radiates outward from itself. It has a natural affinity for melodies both tragic and heroic, for distortion and noise, for breath and voice, but also for a visual medium that allows us to look into the shape of language, to glimpse the shadow of our troubled world in images from times past. In a sense, the poem no longer exists as a discrete literary creation. Through collaboration it blends with other forms, it travels with new companions. If it benefits from long life and good fortune, in the distant future it may one day wash up on its ancestors’ shores.