In this season of ShortCuts we’ve spent some time in a 1969 recording of poet Muriel Rukeyser, and we’re going to stay in that recording for this minisode, partly due to the depth of material within this single recording and partly as an opportunity to reflect upon what a minisode can do – through archival listening – to make connections. Rukeyser once said that poetry is “a meeting place” and this minisode suggests that, like poetry, a podcast is a meeting place. Listen to find out how we arrive at this meeting place and listen, once more, to the voice of the poet who spoke these words: “What would happen if one woman told the truth about her life? / The world would split open.”

Audio clips for this ShortCuts minisode are cut from this recording of Muriel Rukeyser’s reading in Montreal on January 24, 1969.

A fresh take on sounds from the past, ShortCuts is a monthly feature on The SpokenWeb Podcast feed and an extension of the ShortCuts blog posts on SPOKENWEBLOG. Stay tuned for monthly episodes of ShortCuts on alternate fortnights (that’s every second week) following the monthly SpokenWeb podcast episode.

Keenaghan, Eric. “Interchange – How to Be Anti-Fascist: Muriel Rukeyser and The Life of Poetry.” Interchange, https://beta.prx.org/stories/355960.

Malcolm, Jane. “The Poem Among Us, Between Us, There: Muriel Rukeyser’s Meta-Poetics and the Communal Soundscape.” Amodern 4: The Poetry Series (March 2015), http://amodern.net/article/poem-among-us/

—. “Käthe Kollwitz.” The Collected Poems of Muriel Rukeyser. U of Pittsburgh P, 2006.

With that, let’s begin our archival listening to specific clips in the reading by Rukeyser.

On a cold January night in 1969, Muriel Rukeyser started her reading in Montreal by asking the audience to consider [...]

Archival audio [excerpt of Rukeyser reading from “Anemone”]: “Anemone. My eyes are closing, my eyes are opening, you are looking at me with your waking look…”

Katherine McLeod We listened to that poem in minisode 2.4 as a way of hearing the relationality that she spoke of as being created through the poetry reading, and how it was enacted through that poem. We also considered how an archival listening creates a connection between the past and present. Rukeyser’s critique of nuclear testing in 1969 speaks very much to our current climate crisis.

After making those minisodes, I shared the link, I tweeted it out, and I was elated to see a notification: “Muriel Rukeyser has liked your post” No, it wasn’t Rukeyser herself haunting my Twitter feed, but it felt as though she had heard it – it was Twitter account of the archival project, Muriel Rukeyser: A Living Archive. They had listened to ShortCuts and were excited about the recording that existed of Rukeyser – a recording that they had not yet been aware of.

Muriel Rukeyser: A Living Archive is holding a symposium during the same week when this minsode will go live – the entire symposium is based around Rukeyser’s series of Elegies. I assumed that there would be many recordings of Rukeyser reading from Elegies but it turns out that there are not – in fact, there might be very few – or even one. I know there is because, yes, it is on that very same 1969 reading by Rukeyser here in Montreal. Not only does this recording have a rare sound in that Rukeyser reads from Elegies but also when she introduces that she notes that she has never read it like this before. She cuts it up, and we’ll listen to her read the poem in its entirety as our short cut this month…

Archival audio (Rukeyser): Here's one piece of a long poem. It’s the last of a group called “Elegies,” which one hardly dares name anything anymore. It's called "Elegy in Joy" and this is just a beginning piece, I wanted to do it tonight this way, I've never cut it up…

[Rukeyser reads “Elegy in Joy,” ending with the words “Every elegy is the present: freedom eating our hearts / death and explosion, and the world unbegun.”]

Katherine McLeod: "Every elegy is the present" –  what an ending to that poem. But that is not how the poem ends on the page. What we just heard is only the first of three sections of "Elegy in Joy"; however, by choosing to "cut it up," as she says, she creates a new version of this poem through the reading of it – a version in sound that lets those lines ring out, as though they were the end of the poem. “Every elegy is the present” is a line that reminds me of how she ends the entire reading by asking the audience to encounter the present moment. She reads "The Speed of Darkness" that ends with a question: “Who will speak these days, /if not I, / if not you?”

The juxtaposition of those three sounds I find incredibly affecting: the powerful call out to you, the barely audible “thank you very much,” and the roar of applause that goes on for quite some time.

I listen again – and again – to that [archival audio of Rukeyser speaking the words] thank you very much. I am in that room can see her standing at the front with the microphone and her papers; it is as though the entire room takes a breath between the reading and the applause, an in-between space, an in-between sound – that voice who had just spoken these words with such volume: who will be the throat of these hours? – a phrase that reminds us of the body as the source of sound. This is the same voice, the same body, who wrote and spoke these words within the past year of this reading: “What would happen if one woman told the truth about her life? / The world would split open.”

Now hear that applause again, all 25 second of it. If we listen to it all the way through we hear the announcement of the F.R. Scott reading on Feb 14, bringing us back in time to the present moment of the reading, and back to Montreal with F.R. Scott the Montreal modernist… Let’s hear all of that again.

Archival audio [Rukeyser readings]: “Who will speak these days, /if not I, / if not you?... Thank you very much... [Full applause for 25 seconds] [Voice of an unknown host] We wish to announce that the next reading will be by F.R. Scott at the same time in the theatre in the basement of this building. Thank you. [Background noise continues.]

Katherine McLeod: As you can hear, the recording doesn’t stop. Nobody presses the button. It continues recording. Now this is the sound of the room, this is the sound of the audience, this is the sound of what it felt like to be there. This recording of the social interactions, even as muffled as there are, conveys the sound of that reading in its time, which is even more interesting to us during our current time of the pandemic when we long for attending an in-person event. We are hearing what Rukeyser has described as defining the poem: the poem as a meeting place. It is a point that Jane Malcolm makes in her brilliant analysis of this recording. Do check the show notes for that reference. And it is a point that I hear again, listening now. A meeting place...

I think of the conversations that I’ve had recently with Muriel Rukeyser: A Living Archive and I hear it almost as one of these conversations happening after the reading; but, it didn’t happen after a reading, it happened after a listening. That makes me imagine what connections can come of future sound-based criticism as forms like the podcast continue to circulate and to be heard. The podcast, like poetry, relies upon its “moving relations” – to quote a phrase of Rukeyser’s – moving relations within itself and with its listeners. And, to me, it seems that, like poetry, the podcast is a meeting place…

[Audio of the noise of the room, inaudible voices and moving of objects, continues to play during the outro]

Katherine McLeod: I’m Katherine McLeod, and these minisodes are produced by myself, hosted by Hannah McGregor, and mixed and mastered by Stacey Copeland. Head to SpokenWeb.ca to find out more about ShortCuts and The SpokenWeb Podcast. Head to Muriel Rukeyser: A Living Archive to find out more about the symposium on Feb 19. If you are listening to this after the symposium, thank you for listening and for being part of these connections. Tune in next month for another deep dive into the sounds of the SpokenWeb archives. 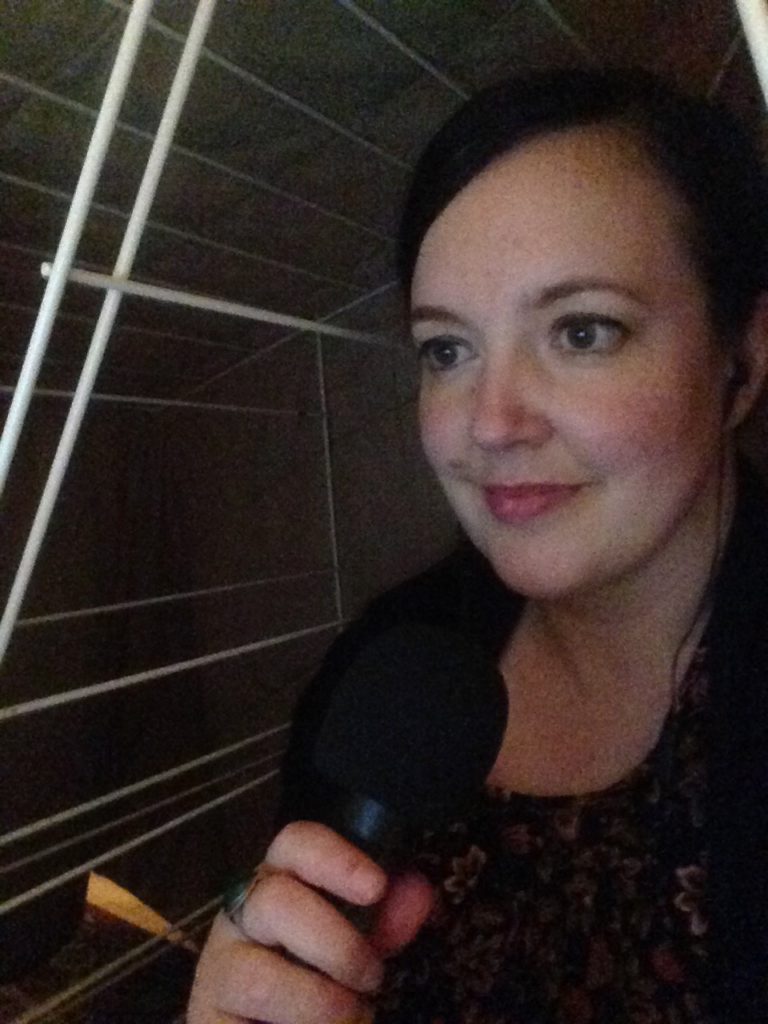 Katherine McLeod researches archives, performance, and poetry. She has co-edited the collection CanLit Across Media: Unarchiving the Literary Event (with Jason Camlot, McGill-Queen’s University Press, 2019). She is writing a monograph (under contract with Wilfrid Laurier University Press) that is a feminist listening to recordings of women poets reading on CBC Radio. She is an affiliated researcher with SpokenWeb and she is the 2020-2021 Researcher-in-Residence at the Concordia University Library.