In the early 1980s, the University of Alberta funded a series of experimental literary radio programs, which were broadcast across the province on the CKUA community radio network. At the time, CKUA station had just been resurrected through a deal with ACCESS and was eager for educational programming. Enter host and producer Jars Balan – then a masters student in the English department with limited radio experience. For five years, Balan produced three radio series, Voiceprint, Celebrations, and Paper Tygers, which explored the intersection of language, literature, and culture, and he interviewed some of the biggest names in the Canadian literary scene, including Margaret Atwood, Maria Campbell, Robert Kroetsch, Robertson Davies, and many others.

This episode is framed as a “celebration” of those heady days of college radio in the early 80s. In it, clips from Jars’s radio programs, recovered from the University of Alberta Archives, supplement interviews with Balan and audio engineer Terri Wynnyk. Special tribute will be given to the recently departed Western Canadian poets Doug Barbour and Phyllis Webb through the inclusion of their in-studio performances recorded for Balan’s own Celebrations series. By looking back on the pioneering days of campus radio, this episode sheds light on the current moment in scholarly podcasting and how the genre is being resurrected and reimagined by a new generation of “academics on air.”

Special thanks to Arianne Smith-Piquette from CKUA and Marissa Fraser from UAlberta’s Archives and Special Collections, and to SpokenWeb Alberta researcher Zachary Morrison, who worked behind the scenes on this episode. 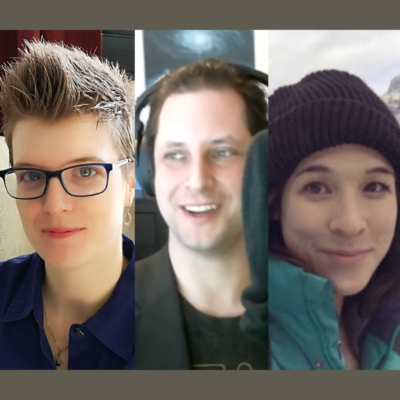 Ariel Kroon is a recent graduate of U of A. Her PhD thesis studied narratives of crisis in Canadian post-apocalyptic science fiction from 1948-1989, and what contemporary Canadians can learn from them. She is interested in the ways that the attitudes of the past shape our future-oriented imaginaries and actions in the present. She has published in SFRA Review and The Goose, and is currently a non-fiction editor at Solarpunk Magazine. Research interests of hers include post-humanist feminist theory and philosophy, ecocriticism, and solarpunk. Connect with her on YouTube, at Academia.edu, or her personal blog.

Nick Beauchesne (U of Alberta) completed his doctoral studies at the University of Alberta in 2020. He currently works remotely as a sessional instructor at the U of A, and in-person at Thompson Rivers University in Kamloops, BC. His speciality is in twentieth century occult literary networks and modernist magazines, and he is also a vocalist and synthist performing under the pseudonym of Nix Nihil. As a SpokenWeb RA, he is currently preparing to present at the upcoming Symposium on Campus Radio at U of A in the 1980s and its contribution to debates around sexist language.

Chelsea Miya is a Postdoctoral Fellow with the SpokenWeb research team at the University of Alberta. Her research and teaching interests include critical code studies, nineteenth-century American literature, and the digital humanities. She has held research positions with the Kule Research Institute (Kias), the Canadian Writing Research Collaboratory (CWRC), and the Orlando Project. She co-edited the anthology Right Research: Modelling Sustainable Research Practices in the Anthropocene (Open Book Publishers 2021), and her article “Student-Driven Digital Learning: A Call to Action” appears in People, Practice, Power: Digital Humanities outside the Center (MIT Press 2021).

“Linguistic Taboos and Censorship in Literature.” Voiceprint. Dept. of Radio and Television and CKUA, 8 April 1983.

“Women’s Language and Literature: A Voice and a Room of One’s Own.” Voiceprint. Dept. of Radio and Television and CKUA, 4 March 1981.

“Speech and Its Characteristics.” Voiceprint. Dept. of Radio and Television and CKUA, 18 March 1981.

The SpokenWeb Podcast wishes to hear from any copyright owner, or their representative, who believes that this project has not properly attributed their work, has used it without authorization in violation of Canada’s Copyright Act, or has released confidential information in violation of the Alberta Freedom of Information and Protection of Privacy Act.