ShortCuts is a SPOKENWEBLOG series of critical commentaries about short clips selected from audio collections across the SpokenWeb network. Previously called Audio of the Week, ShortCuts is curated by Katherine McLeod, with submissions open to all SpokenWeb researchers. Clips are short – from background noise during a reading to a short poem – accompanied by a written blog post that explores what was so surprising, perplexing, moving, delightful, and/or memorable about hearing that archival sound. ShortCuts listens closely to one audio clip ‘cut’ out of its original context, along with a link to the collection from which it is excerpted. Selected ShortCuts blog posts are produced as ShortCuts minisodes on The SpokenWeb Podcast.

While listeners to radiofreerainforest will know that this radio program is no stranger to the bizarre, Gerry Gilbert and Billy Little’s reading of Lewis Carroll’s poem, “You Are Old, Father William,” is a reminder of what makes the bizarre so great while paying homage to one of the greats of bizarre literature. Bouncing a series of falsettos and low grumbles off of each other, they act out the scene of a youth pestering his father with questions – the questions being as odd as the father’s replies, and culminating in the father commanding his son to “be off!” and cease his interrogation. In the poem, the son’s aim is to understand why his father seemingly acts inappropriately for his age, while the father means to impart the wisdom he has gained with age, which, paradoxically, is that age is an arbitrary concept that bears little to no meaning on what one “can” or “cannot” do. Gilbert and Little’s playful reading adds the perfect touch to their revival of Lewis’s message to not take age too seriously, but, to me, the message goes even further.

As a student in Simon Fraser University’s Department of English and as an RA for SpokenWeb, I find myself regularly faced with my own interrogation: what makes literature important? Often this question is watered down, as it’s directed at a specific work or author – probably in an attempt to dissect the Very Important Meaning of whatever it is I am told has a Very Important Meaning. Other times – particularly when I come up against individuals from non-arts backgrounds (or as my mother calls them, “practical”), I am faced with this question in its full form: why is literature Important? What makes it So Important that I feel compelled to devote thousands of hours and dollars in the pursuit of – well, in the pursuit of what, exactly?

Usually I take this as a Serious Question, which calls for a Serious Answer.

“Well,” I might say, “arts and culture are a record of history – so really, I’m a historian of the arts.”

Or “literature is key to disseminating new ideas about society and ways of being – so really, I’m a political science scholar.”

(Or, if I’m pressed hard enough: “the analysis of texts is a highly transferable skill – so really, I’m keeping my options open.”)

Perhaps because I (or we, for those who can relate) am (and are) so used to holding up the gates of literature to questions of why’s and how come’s that the stance that comes most naturally is that literature is A Very Serious Thing. Carroll’s poem and Gilbert and Little’s reading of it are reminders to STOP and laugh – at how absurd literature is, worrying is, life is! “Don’t give yourself airs!” the father bellows to his son, and to anyone who asks too many questions. To contrast, Gilbert voices the words in a superficial trill, as if to say to his listeners: “I’m ridiculous! What of it?” 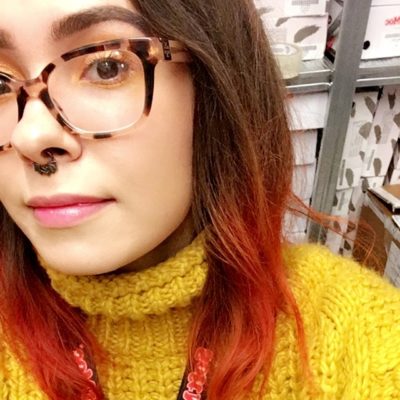 Nina Fesenko is an undergraduate student at Simon Fraser University, pursuing a double-major in English and Communication, along with a minor in Creative Writing. Her interests lie in interdisciplinary fields such as science communication and comparative literature, as she looks to explore the murky territory of where humanistic disciplines converge with one another, and with the social and natural sciences.