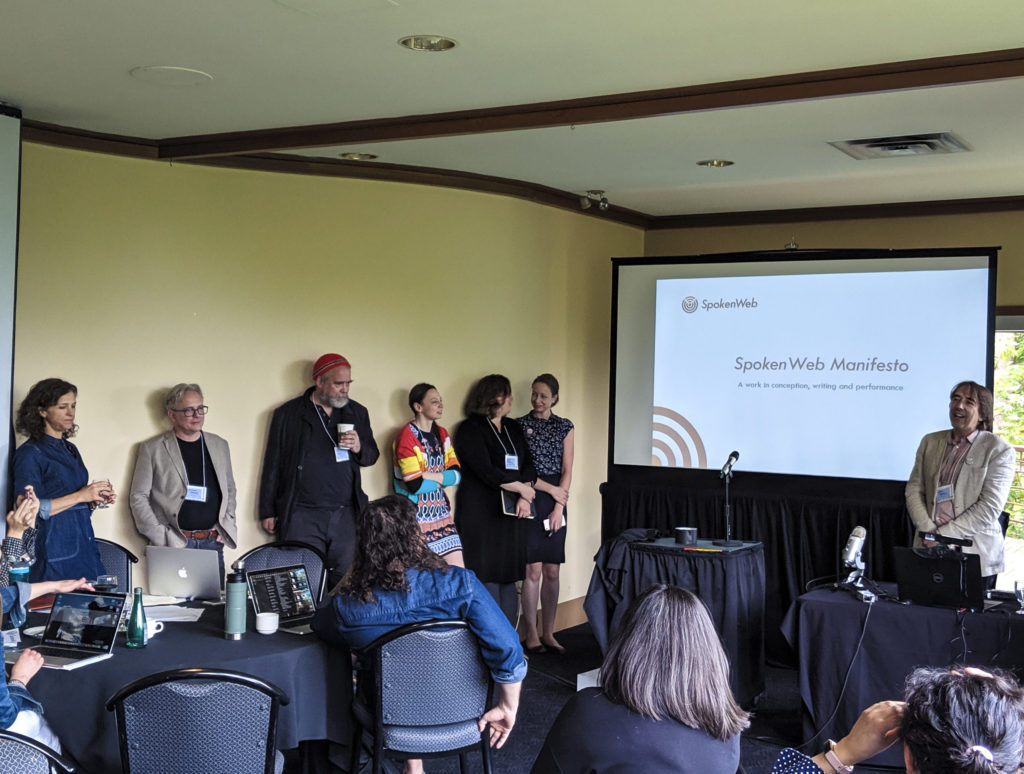 I’ve lived in Montreal my whole life, but, sadly, up until last year my experience of Canada beyond my home province consisted only of occasional trips to Ontario. When I found out that SpokenWeb was hosting the 2019 Symposium (Resonant Practices In Communities Of Sound) and the SpokenWeb Sound Institute in Vancouver – and that I was invited – I was equal parts ecstatic, nervous, and curious. In the final days of May 2019 I would make my way clear across the country, travelling to BC for the first time, presenting at my first conference as a grad student, and finally meeting the members of the extended SpokenWeb team in person.

After arriving in downtown Vancouver, I hopped on a bus that brought me straight to Simon Fraser University’s beautiful mountaintop campus in Burnaby for two sun-filled days of sharing, learning, and teaching surrounded by row after row of trees and a room full of 55 engaging, hard-working, and passionate people. The SpokenWeb Sound Institute (SSI) is an annual institute in which SpokenWeb researchers reflect upon the work of the past year, solidify the work of each of the Task Forces, share tools and knowledge, and plan for the year ahead.

As one of the many SpokenWeb student RAs in attendance at the SSI, I was tasked with presenting a 5-minute lightning talk about my preliminary research on applause in the Sir George Williams Poetry Series. Despite the brevity of the time that I would be in front of an audience, I was anxious as I reviewed my notes in my rented SFU dorm room, feeling somewhat out of my depth at the thought of addressing an audience of professors and academics with extensive knowledge of and deep love for sound studies, poetry, oral history, and archival work. I’m certain I was not alone in finding that my concerns quickly vanished as the events commenced. The feedback I received was positive and constructive and, though I was worried my interest in applause would seem boring to others, everyone found it quite fun! (I even won a SpokenWeb tote bag for “Most Comical Use of Audio Clips” at a cheeky award ceremony held at the end.) It can be tough to feel comfortable and confident as a student researcher, but the faculty members made our efforts feel valued and made us feel supported by happily handing us the mic and encouraging us to pursue our interests further.

Getting to know the wider network of students and faculty was truly wonderful, but the SSI actually ended up being the most fruitful time for developing closer connections with my peers from back home. It’s ironic (and somewhat of a cliche) that we had to travel to the other end of the country in order to become better acquainted, but, during my first year on the project, the Concordia team didn’t have our lab space set up yet and the majority of our work was done at home by ourselves. At the SSI, we were able to chat during lunch and coffee breaks, explore the SFU campus together, and collaborate as we participated in a series of workshops on subjects ranging from podcasts to pedagogy, metadata to rights management.

Then, during the final session at the SSI, came the announcement that we would all contribute to the writing and recording of the first iteration of The SpokenWeb Manifesto…and we would only have about ten minutes to draft our statements. My anxiety made a swift return as my mind raced through a jumble of half-thoughts trying to decide what to say. How could I capture all that SpokenWeb encompasses in a single statement? Each table was joined by a member of the Governing Board to brainstorm ideas. My Concordia cohorts – Klara du Plessis, Andrew Roberge, Katherine McLeod, and our webmaster, Max Stein – workshopped our ideas along with University of Alberta’s Mike O’Driscoll. Our table’s discussion made me realize that I should embrace the spontaneity of the exercise and it reassured me that there was not one way to define what SpokenWeb is or what it does. With our statements written down, we proceeded to line up table by table and got ready to record. Each of us stepped up to the microphone in turn and contributed to the creation of a sonic record, telling the world what SpokenWeb means to each of us as individuals and as part of a collaborative project. The resulting manifesto is a representation of the diversity of our team’s backgrounds, interests, and perspectives that can be heard not only in the content of the words, but in the length of our statements, in our varied speaking styles, and in the tone each of us tries to establish. Some of us are practical, others more poetic. But when we play back the recording, it all sounds right. The pieces, though roughly outlined, fit.

This video is meant to commemorate and reaffirm the production experience for those of us who participated and to share our message with those who did not. However, this is by no means meant to serve as a fixed text in its final form. The manifesto, like the project, will continue to grow and evolve as members come and go and as new voices resonate with and against those heard on May 29th 2019. 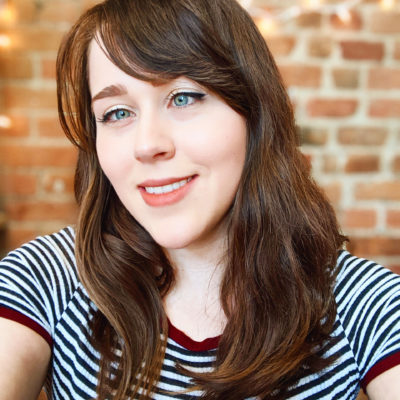 Ali Barillaro is a second year Master’s student in English Literature at Concordia University with previous degrees in both photography and education. As a member of the SpokenWeb student team, she has worked on processing and cataloguing the Words and Music Show collection and has been researching audience response in the context of recordings of poetry readings. She also works as our social media manager, so be sure to come say hi on Facebook, Twitter, and Instagram!